Tesla is arguing that it doesn’t have to close its U.S. plant in spite of the coronavirus pandemic.

Instead, the company is handing out face masks, checking employees’ temperatures before they enter the factory and rearranging operations where it can to allow social distancing. 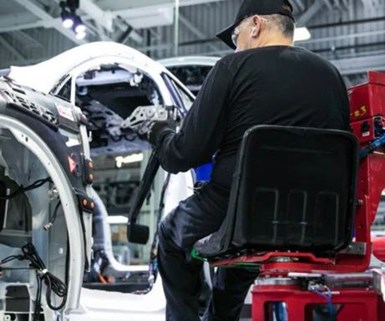 Earlier this week, the news service says, she told employees that the Fremont, Calif., facility would remain open because vehicle manufacturing in general qualifies as a “critical sector” of America’s manufacturing base per federal Dept. of Homeland Security guidelines.

Tesla is using that position to justify ducking a San Francisco Bay Area edict that all businesses must send their employees home to stem the spread of COVID-19, the respiratory disease caused by the virus. The region has ordered some 7 million area residents to remain at home except for short, essential trips.

The Meaning of “Minimum”

Alameda County, where the Tesla factory resides, is not impressed with Tesla’s argument. The county asserts that the carmaker, like other area employers, is permitted under a county health order to maintain only enough staff to maintain “minimum basic operations.”

Tesla may be interpreting that phrase to mean it would be okay to deploy at least enough staff to continue making vehicles, even under the edict. The plant is the sole U.S. source for the company’s entire lineup of electric cars.

Not so, says the county sheriff’s office. “In war time,” it explains to Bloomberg, “all automakers are considered vital national infrastructure. But this is a health pandemic.”

The county sheriff’s office told Bloomberg yesterday that Tesla was preparing to slash its plant’s workforce to 2,500 from the normal staff of about 10,000. Workman’s memo says that is inaccurate.

Whether Tesla plans to ignore the edict outright, reduce its staff but continue to make cars—if only at a trickle—or take some other course isn’t clear. The company isn’t talking.

Meanwhile, California Gov. Gavin Newsom says the state is working to clarify what it means by “essential” in its directives.