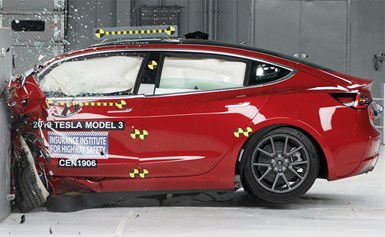 A third tested model, the Chevrolet Bolt all-electric car, also earned top scores on all but one of the IIHS crash tests.

The Bolt received a second-best rating in the institute’s demanding passenger-side frontal small overlap crash. The test requires the front corner of a vehicle to absorb the full energy of a 40 mph impact frontal impact.

But the Bolt failed to win a top overall rating because its headlamps created too much glare and received a “poor” score.

Audi AG’s e-tron plug-in electric car is the only other electrified vehicle to win an IIHS Top Safety Pick Plus rating.