This follows a $1,000 jump in July. And the price is likely to increase a lot more…for a feature that has just begun beta testing.

“The FSD price will continue to rise as the software gets closer to full self-driving capability with regulatory approval,” Musk says. As a result, he reasons, “the value of FSD is probably somewhere in excess of $100,000.”

As a reminder, the FSD system Tesla began allowing select customers to “cautiously” test earlier this week isn’t fully autonomous. At least not by SAE’s Level 5 definition, which takes drivers completely out of the equation (i.e., hands-free, eyes-off-the-road operation with no intervention). 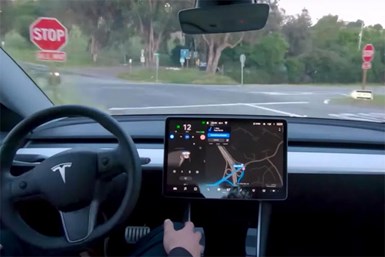 The latest version of Tesla’s Autopilot technology—one of the most advanced systems available—typically is characterized as Level 2 or 2+ on the SAE spectrum. This means a car can operate itself under certain situations, but drivers must keep their attention on the road at all times and be prepared to quickly take control if needed.

The beta version of FSD includes several upgrades over the standard Autopilot, which Tesla has regularly updated since introducing the technology in 2015. FSD capabilities include:

As with previous enhancements, the new FSD software is installed via over-the-air updates. Tesla claims the base Autopilot hardware has been primed for full autonomy for about four years.

In a disclaimer issued to owners testing FSD, Tesla stresses the need for users to be ready to quickly retake control of the vehicle if needed.

“Full self-driving is in early limited access beta and must be used with additional caution,” the carmaker warns, adding that drivers should be especially vigilant around blind corners, crossings, intersections and through narrow passageways.

“It may do the wrong thing at the worst time,” Tesla adds, “so you must always keep your hands on the wheel and pay extra attention to the road. Do not become complacent.”

The initial rollout is limited to an undisclosed number of "expert, careful" drivers, several of whom have posted videos of FSD in action. But the carmaker plans to quickly expand beta testing and expects wide availability by year-end.

This will allow the system’s neural network to learn from the real-world testing and tweak algorithms on the fly for a more robust performance, according to Tesla.

Not everyone agrees with the approach. In fact, most competitors have been critical.

"Public road testing is a serious responsibility, and using untrained consumers to validate beta-level software on public roads is dangerous and inconsistent with existing guidance and industry norms.”

The National Highway Traffic Safety Administration also weighed in, albeit in a slightly more diplomatic way. The regulatory agency says it has been briefed on FSD, which it refers to as an expansion of Tesla’s current driver-assist system.

Vowing to closely monitor the technology, NHTSA says it “will not hesitate to take action to protect the public against unreasonable risks to safety."

NHTSA and other regulators have investigated several accidents involving Tesla vehicles operating in Autopilot mode. In at least one case, the system has been faulted for being partly to blame for a crash.

But Tesla continues to push the technology forward, even if it isn’t as fast as Musk previous as targeted. And it’s clear that prices will escalate as new features are added.