Panasonic is in talks with Tesla about hiking battery production at the carmaker’s Gigafactory outside Reno, Nev.

The huge plant has been using Panasonic technology to make lithium-ion cells since the complex opened in 2016. The facility then assembles the cells into batteries to power the electric cars Tesla builds in Fremont, Calif. 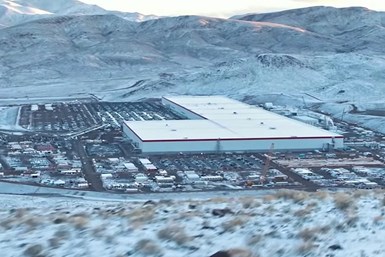 The factory currently has annual capacity of 32 gigawatt-hours, the equivalent of enough batteries to power about 450,000 EVs. The negotiations revive plans to boost capacity to 54 GWh, a level the partners once hoped to reach a year ago.

Tesla and Panasonic has big plans when the Nevada factory was finalized in 2014.

Tesla said the giant complex, which eventually would cost $5 billion, aimed reach annual capacity of 35 GWh (500,000 EV batteries) by 2020. Panasonic agreed to contribute as much as $1.6 billion in multiple installments, starting with an initial $250 million, over several years.

There was talk of Tesla finalizing site locations for at least two more battery gigafactories by the end of 2017 (something that hasn’t happened yet).

The capacity targets were synchronized to match the launch of Tesla’s first mass-produced EV, the Model 3. But the Model 3 was bedeviled by manufacturing stumbles that dragged out its launch for more than a year.

By early 2019, cracks were appearing in the Tesla-Panasonic partnership.

Musk groused that only 24 GWh of the plant’s “theoretical” 35 GWh installed capacity was actually usable. He blamed inefficiencies in the plant’s Panasonic-managed cell-making operations. Musk cut off further investment in plant capacity until Panasonic’s performance improved.

In the meantime, Tesla opened talks with other battery suppliers for the assembly plant Tesla has since opened in Shanghai. The company also launched a secretive project to develop its own revolutionary next-generation battery. Details of that “skunkworks” project are expected to be announced later this month.

Panasonic warned a year ago that the battery factory wouldn’t be able to keep up with demand when Tesla began making the Model Y compact crossover. The model went into production in California in February.

Panasonic tells its shareholders that advances in battery materials and technology alone should raise the plant’s capacity to 35 GWh from 32 GWh by March 2022. The new negotiations involve the magnitude and timing of investments that would finally boost the factory’s available output to 54 GWh.