The company’s third-quarter revenue from automotive operations zoomed 42% to $7.6 billion. And that was in spite of a decline in revenue per car sold as volume shifted to less expensive Model 3 sedans and Model Y crossover vehicles. 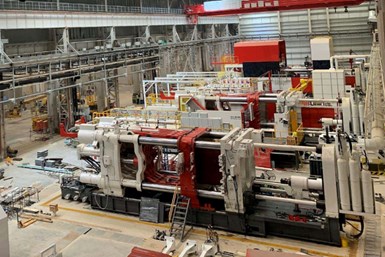 But getting there is another story. To reach its total, Tesla must hike its fourth-quarter sales by more than 60% to 181,000 units. Is this possible? Maybe, but it’s definitely a major stretch.

Capacity not the issue. Tesla says its factories in Fremont, Calif., and Shanghai are now able to make 500,000 and 250,000 vehicles, respectively, per year. The carmaker expects to achieve full production capacity in Fremont by the end of this year.

But Tesla says delivering 500,000 cars in 2020 will depend upon three things: sufficient growth in output at the company’s plant in Shanghai, strong global demand for the Model Y and gains in the logistics and efficiency of its factory-direct sales mechanism. 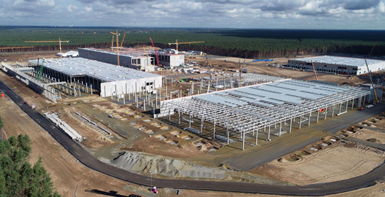 Construction of Tesla’s plant in Germany

Money shouldn’t be a problem for Tesla this year. The company is on its way to reporting its first full-year net profit ever.

Tesla’s third-quarter operating and net incomes were $809 million and $331 million respectively. The company expanded its cash position by $5.9 billion to $14.5 billion.

Those third-quarter gains came as the company shelled out $2.4 billion on new-plant projects in Germany and Texas, advances in its Autopilot control software, and product development efforts for its Cybertruck pickup, Semi highway truck and high-performance Roadster.

There’s no guarantee of sailing from now on for Tesla. But the company definitely has transitioned from startup status to the rank of full-fledged carmaker.