The reason? Musk revealed in August that the company will use the German factory to try out a radical approach to carmaking that features a single huge aluminum casting to replace 70 separate chassis components.

Musk tweeted at the time that his goal is to build the entire “rear body in a single piece, including crash rails.” 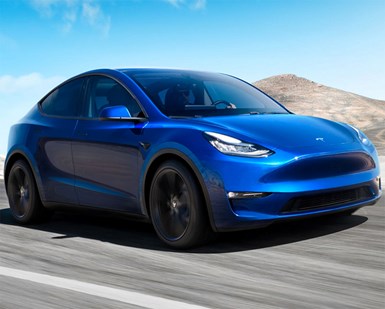 The Model Y in its current form (Image: Tesla)

The enabling technology, untested in the form Tesla wants to use it, will come from Italian die cast machinery maker IDRA, according to Reuters. The supplier brags that its 5,500-ton and 6,200-ton “Giga Presses” are the world largest aluminum forming machines.

They’re also slow-sellers. So far, IDRA has sold just one such press—a 5,500-ton unit—to an unnamed customer. That buyer may have been Tesla.

Why might that be? Auburn Hills, Mich.-based product analyst Sandy Munro notes that the Model Y’s rear underbody already is being constructed of just two large aluminum castings. When joined, they create the biggest aluminum structure he has seen in any vehicle during his 30-year career.

Shooting for the Stars, Again

Musk clearly wants to take his desire to transform carmaking to a new level. He also has repeatedly shown that he doesn’t mind taking huge risks to find ways to cut costs and speed up manufacturing.

It doesn’t always work out. In 2018, Musk famously conceded that his drive for “excessive automation,” including hopes of highly automating the final assembly process, stalled the launch of Tesla’s critical Model 3 sedan by two years.

The company attempted to debug the system but finally replaced much of it with simpler approaches. “Humans,” he acknowledged, “are underrated.”

This time, Musk has a safety valve. If Tesla stumbles in reimaging Model Y manufacturing in Germany next year, the company will have backup factories in the U.S. and China to pick up the slack.

Those facilities, Musk tweets, will transition in two years when the “new tech is proven.”