Tesla to Supply EVs to Europe from China

Tesla says it will begin later this month to ship Model 3 electric sedans to Europe from its factory in Shanghai.

The plan is to supply cars to 10 European countries—including France, Germany and Italy—at least until Tesla’s factory outside Berlin is up and running next summer. 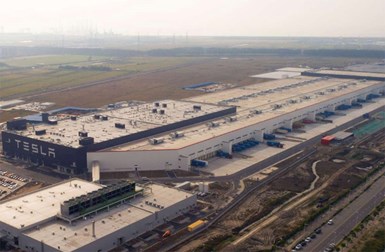 Tesla has been supplying Europe with cars from its home factory in Fremont, Calif. The company hasn’t clarified whether that supply line will continue or be entirely replaced by the new one from Shanghai.

Tesla also hasn’t revealed how many cars it expects to ship from China. Capacity is not an issue. The $2 billion Shanghai facility can make a combined 200,000 Model 3s and the variant Model Y crossovers per year. But the 10-month-old factory it is likely to build only about half that volume this year.

The company sold about 80,500 Model 3s in China through the first nine months of 2020, including 11,300 units last month, according to Inside EVs. To keep momentum building, Tesla also lowered the car’s base price at the beginning of October by 8% to $36,800 (including a $2,900 government subsidy).

Construction of Tesla’s Gruenheide plant remains on schedule for a mid-2021 opening. The company reemphasized last month that the facility also will eventually make next-generation cells and batteries as well, although it hasn’t said when.

In-house battery production is a key to Tesla’s goal of slashing the retail price of its cheapest EV to $25,000. CEO Elon Musk has claimed the company will multiply its global battery capacity 85-fold to a staggering 3 terawatt-hours within three years.

Tesla’s supply moves overseas make plenty of sense. They also underscore the wisdom of the company’s long-held goal of establishing production capacity within each of its three largest markets.