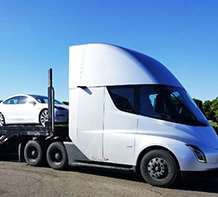 Tesla Inc. is using prototypes of its upcoming Semi electric truck to transport the company’s Model 3 EV to distribution centers.

CEO Elon Musk posted a picture and video of the Semi delivery truck on Twitter over the weekend. In the post, Musk said he was looking forward to getting the Semi into production.

When the vehicle was unveiled in late 2017, Tesla said it aimed to launch deliveries some time in 2019. Since the unveiling, Tesla has announced fleet orders totaling about 2,000 units from big-name companies such as Anheuser-Busch, PepsiCo and Walmart.