The Jaguar XE Is Dead; Long Live the E-Pace

Jaguar sold fewer than 900 XE sedans in the U.S. during the first half of the year.

If you’re thinking that’s not enough to keep it going, you’re right.

Jaguar is dropping the XE, which had served as its entry-level model, after the 2020-model year.

While the coronavirus exacerbated the situation, the XE has been struggling to find its footing in the U.S. since it was introduced in 2015. 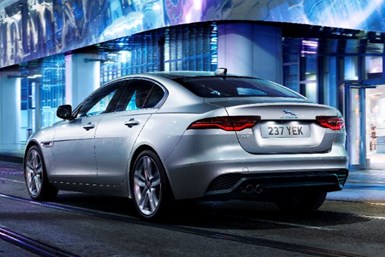 Not all of the problems can be attributed to the industrywide transition from cars to crossover, SUVs and pickup trucks, either. The XE’s chief competitors, the BMW 3 Series and Mercedes C-Class, far outsold their Jaguar rival with sales approaching 50,000 units in 2019.

The XE has garnered generally favorable reviews for its design and performance. But critics tempered their enthusiasm, especially when comparing the XE against the 3 Series and C-Class.

That’s a huge problem for a slow-selling car in a segment increasingly turning to SUV/crossover vehicles, which Jaguar notes now account for two-thirds of the U.S. luxury market.

The E-Pace compact crossover, which debuted three years ago, now will be Jaguar’s starting point in the U.S. The rest of the 2021 lineup consists of the XF sedan, F-Type sports car and three crossover/SUVs (E-, F- and I-Pace). The XF Sportbrake wagon also is being discontinued.

Jaguar claims the XF offers “superior value to entry luxury sedan buyers.” It starts at $45,100, which is about $5,000 more than the current XE. Fewer than 400 XF sedans were sold in the U.S. during the first six months of the year.

The 2021 XF gets a mild makeover. But the car loses its supercharged V-6 engine, leaving two turbocharged 4-cylinder mills.

Pricing for the 2021 E-Pace will be announced later.

Elsewhere in the World

Jaguar will continue to sell the XE in Europe and China. The latter accounts for more than two-thirds of the nameplate’s global sales.

In Europe, Jaguar is cutting the price of the XE by 14%. The 2021 model also gets an updated infotainment system and a mild-hybrid option.

“Globally, the Jaguar XE continues as a very important first step into the brand,” the carmaker says.

The U.S. is a different story.