The Other Super Sunday Sporting Spectacle: Cars on Ice

Racing, “skijoring” and lots of slick rides at the 2020 GP Ice Race in Zell am See, Austria
#Porsche #Volkswagen #HP

Some 5,000 miles from where the Chiefs and 49ers competed for football supremacy in sunny Miami, there was another wild sporting event over the weekend, albeit considerably less hyped (for now). 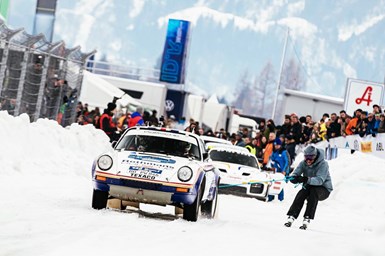 This one took place at a former airfield in Zell am See, Austria, where an assortment of classic and modern cars—including concepts and/or electric models—slipped and slid over a 16-inch-thick ice track.

Some racers towed skiers behind them, while others demonstrated slick drifting capabilities.

The event’s history dates back to 1938, when organizers held a “skijoring” (Norwegian ski driving) contest on a frozen lake in Zell am See. Instead of the traditional horses or dogs, the Austrian course initially used motorbikes to pull the skiers. Cars were added in the ’50s.

But after several previous weather-related problems, the program was discontinued in 1974.

Porsche to the Rescue

After a 45-year hiatus, the event was revived last year as the GP Ice Race—thanks to Ferdi Porsche (the great-grandson of VW/Porsche founder Ferdinand) and his dealer partner Vinzenz Greger.

About 150 cars competed this year in eight race classes. In addition to various EVs, rally cars and vintage rides, the ice race attracted a host of top drivers, Olympic skiers and 16,000 fans braving the snow and cold.

Organizers likened the enthusiastic turnout to the early days of England’s Goodwood Festival of Speed. That event, which started in 1993, has gone on to become one of the premiere shows in the industry. 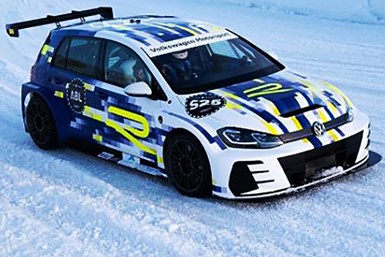 Not to be outdone, Volkswagen used GP Ice to unveil its eR1 demonstration vehicle. Billed as a “view of the future,” the sporty EV is based on the Golf R and is expected to preview a performance variant of the upcoming ID.3 electric hatchback.

The car’s electric 4-wheel-drive system is derived from the 670-hp ID.R that has set records at Pikes Peak, Nurburgring, Goodwood and China’s Tianmen Mountain.

VW R boss Jost Capito says the eR1 will be used to test EV performance capabilities and to do “fun stuff” to showcase the technology. Sounds intriguing. But how do you top cars on ice?