This Car Comes With Its Own Drone

Renault SA has unveiled a crossover concept that can launch its own drone to scout traffic conditions ahead or take pictures of the scenery.
#oddities #Renault 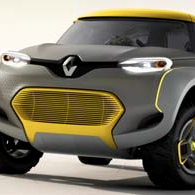 Renault SA has unveiled a crossover concept that can launch its own drone to scout traffic conditions ahead or take pictures of the scenery.

the KWID concept is a chunky crossover vehicle with a built-in hangar in the roof for what Renault calls a Flying Companion. The little camera-toting drone can be used to patrol a pre-programmed route and determine the car's position. It also can be operated manually (by a passenger) using tablet-based controls to take landscape photos or explore the car's environs.

Renault says the the drone is meant to appeal to young customers who like technology and want to make driving more fun. The aircraft is deployed from a hinged cover at the back edge of the roof.

The KWID itself powered by a 1.2-liter turbocharged gasoline engine and dual-clutch transmission. It's also designed to carry a battery for all-electric operation. Interior features include electrically powered doors, touch- rather than lever-controlled gear shifting and a display screen dashboard that doubles as a connected-car services center.