Organizers of the Tokyo auto show say attendance over the event’s 12-day run topped 1.3 million people, up 70% over depressed 2017 levels.

The show credits much of its revival to efforts led by Toyota Motor Corp. President Akio Toyoda to market the show more like a theme park.

The turnout reversed steady declines for the biennial show, which reached a high of 2 million visitors in 1991. Attendance at other global auto shows also has plunged as carmakers shift their resources to private events and other venues. 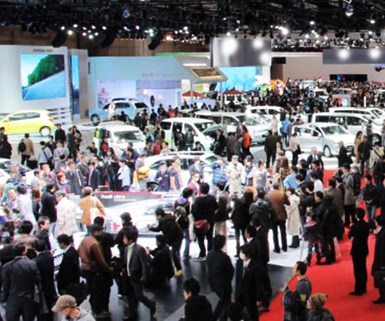 The increase (including paid and free admission) was achieved despite the participation of only a handful of foreign brands and a makeshift exhibition space. The latter was due to construction at the venue’s waterfront site in preparation for next year’s Summer Olympics.

In addition to traditional car displays, the Tokyo show included a variety of entertainment activities. These ranged from musical performances and video game tournaments to drift-driving demos and aerial drone racing. Admission to these areas was free.

Toyoda, who also heads the Japan Automobile Manufacturers Assn., had set a goal of 1 million visitors for this year’s Tokyo show, which closed on Monday.

In September, Toyoda was appointed to a second two-year term at JAMA. He already is looking ahead to the next show, vowing that the 2021 event will be “far beyond” his imagination.