The competition is fierce. In addition to other mapping companies, TomTom is vying with tech companies, traditional suppliers and OEMs for a piece of the action.

To date, it’s had mixed results. Recent wins include contracts with BMW and PSA Group. But the Netherlands-based supplier also has lost major contracts to rivals Google Maps and HERE Global, and last year divested its telematics fleet management unit.

One way TomTom is putting its map data to work is to help trucks become more efficient. To this end, a new partnership with Bosch and Daimler’s commercial truck unit promises a 5% fuel savings by providing vehicles with advance information about the upcoming road. 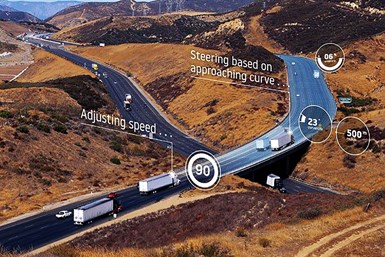 The so-called “smart cruise control” system uses TomTom maps for the lowdown on topography, including road gradients, curves and changing speed limits. Daimler’s Predictive Powertrain Controller, available in the new Mercedes-Benz Actros, takes it from there. It uses the information to adjust engine, transmission, steering and braking functions accordingly to maximize fuel efficiency.

Bosch integrates the data. Its electronic horizon system also can make updates on the fly—comparing real-time data with historical settings—and share the information with connected vehicles.

TomTom also is working with Hitachi Automotive on a system to detect and quickly communicate information about road hazards.

The system uses Hitachi’s sensor, processing and artificial intelligence technologies to identify everything from potholes to road debris and construction zones. This information is transferred to TomTom’s cloud-based platform, which would then distribute it to subscribers—the same way TomTom provides motorists with real-time traffic updates.

The partners announced a proof-of-concept project last week at CES. They say the system can improve traffic flow and safety, as well as enhance ride comfort and reduce stress.