Running of the historic French race was delayed 3 months due to COVID-19. No spectators were allowed.
#Toyota #racing 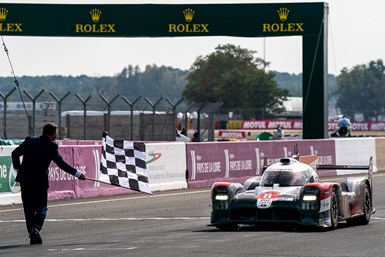 The No. 8 Toyota car was piloted by Sebastien Buemi, Kazuki Nakajima and Brendon Hartley.

The race is the last Le Mans that will use the top LMP1 class format.

Next year will usher in new rules along with a Hypercar category. Organizers hope the change will attract more OEMs to compete.

Currently, Toyota is the only manufacturer fielding a factory team (and Toyota vs. Rebellion doesn’t have the same ring to it as Ford v Ferrari). Toyota will switch from its TS050 car to a new GR Super Sports hypercar in 2021.

Toyota’s No. 7 started on the pole and held the lead for much of the race until an engine problem sidelined the car for about 30 minutes.

The win also was the third in a row for Buemi and Nakajima. Hartley, who replaced two-time Formula One Champion Fernando Alonso on the Toyota team, won as part of the Porsche LMP Team in 2017.

In other classes, United Autosports Oreca finished first in the LMP2 class, and Aston Martin took top honors in the GTE Pro class.