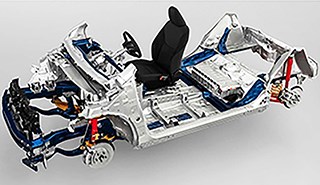 The new platform (pictured) is a variant of the Toyota New Global Architecture, which was launched in 2015 for C-segment models such as the Prius hybrid and Camry sedan. GA-B is expected to carry the next-generation of the European version of the Yaris hatchback and other subcompact cars and crossovers.

The GA-B platform features a MacPherson strut front suspension with low-friction dampers and either a torsion beam or multi-link rear unit. Toyota also touts the chassis’ low center of gravity and an advanced structural design that provides a “highly rigid” underbody.

The wheels are pushed to the far corners of the chassis, which allows for short body overhangs, improved handling and more interior space. The driver's seat is set further back and lower, which Toyota claims is a more “engaging” position.