If fuel cell vehicles ever become a thing, Toyota should get a large part of the credit. The carmaker has developed and tested the hydrogen-based technology in everything from cars and trucks to buses, forklifts, stationary generators and marine applications.

In its latest project, Toyota is teaming with its Hino Motors affiliate to jointly develop a heavy-duty, hydrogen-powered truck. The demonstration model will be based on Hino’s Profia cab-over chassis.

The Profia application will use Toyota’s latest fuel cell system, which will debut later this year in the next-generation Mirai sedan. 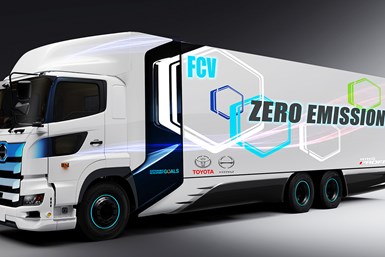 In this case, two of the Mirai’s fuel cell stacks will be used. The setup has been optimized for use in a commercial truck, including unspecified weight reductions and performance gains, the partners say.

Hino will provide control and electronic components adapted from its hybrid-electric trucks. Driving range is estimated to be about 600 km (373 miles).

Toyota has been working on fuel cell trucks for a long time. It’s development partnership with Hino dates back more than 15 years, starting with a retrofit bus application in 2003.

The carmaker also is working with Kenworth on a pilot program that is testing fuel cell-powered Class 8 trucks at a Los Angeles shipping port.

Earlier this year, Honda and Isuzu agreed to cooperate on an advanced research program that could eventually lead to Honda’s fuel cell technology being adapted for use in Isuzu’s heavy-duty trucks. Such partnerships allow companies to share development costs.

Meanwhile, Volkswagen’s Scania unit and Hyundai are moving forward with their own separate plans for fuel cell trucks. The list also includes Nikola, an Arizona-based startup that is working with Bosch to launch several fuel cell and all-electric heavy-duty trucks.

Commercial trucks and buses are well suited for fuel cell applications because they typically have relatively short fixed daily routes and return to a common facility, where they can be refueled on site overnight. This alleviates concerns about the shortage of hydrogen stations until a supporting infrastructure is created.

Toyota is optimistic that the cost of fuel cell-powered cars will be on par with hybrid-electric models by the end of the decade. Hyundai also has ambitious plans for the technology.

For now, however, there only a handful of fuel cell cars—the Mirai is joined by the Honda Clarity, Hyundai Nexo and Mercedes GLC—on the market. Cumulative combined sales of the vehicles (including their predecessors) in the U.S. since 2012 total about 8,000 units.

Toyota had hoped to showcase its latest fuel cell technology at this summer’s Olympics, where the new Mirai was expected to be unveiled. That’s not going to happen now. The Olympics, like most other events, has been postponed in the wake of the coronavirus pandemic.