While the auto industry largely has backed off near-term deployment plans for fully autonomous vehicles, startups specializing in the technology continue to attract hefty investments.

The latest beneficiary is Pony.ai, a 3-year-old artificial intelligence and computer vision specialist with dual headquarters in China and California, which has landed $462 million in new funding. This increases total investment in the company to $800 million and triples its value to $3 billion from about $1 billion last October. 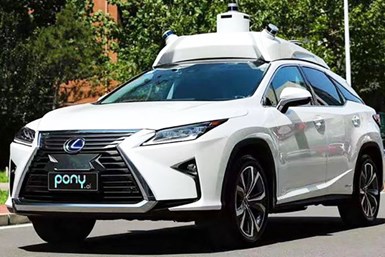 Toyota, which began working with Pony.ai last year, is providing the bulk of the money ($400 million). The remainder is from existing investors such as IDG and Sequoia Capital China.

The startup plans to use the new funds to expand its test fleet and accelerate commercialization efforts. Pony.ai says it also may partner with Toyota to co-develop mobility services.

Pony.ai has been evaluating Level 4 robo-taxis in China and California since late 2018. It began tests with Toyota, using a Lexus RX (above) outfitted with Pony.ai’s sensor and control technologies, in two Chinese cities last September.

This was followed by a partnership with Hyundai, which in November began testing specially equipped variants of its Kona crossover with consumers on public roads in Irvine, California.

Earlier this week, Pony.ai announced plans to expand its test in California in a partnership with the city of Fremont, where the company’s U.S. operations are based. City employees will get free rides between downtown offices and a public transportation center.

In all of the programs, a backup driver rides in the vehicles to take control if necessary.

Toyota has invested in more than a dozen autonomous vehicle projects since 2010, according to PitchBook Data, which tracks such deals. Among the carmaker’s investments are $500 million and $600 million deals with Uber and Chinese ride-hailing giant Didi Chuxing, respectively.

Such investments are likely to continue throughout the industry as companies race to develop and commercialize new technologies. Over the past two years, investors spent a combined $14.6 billion on some 320 deals related to autonomous cars, according to PitchBook.