Toyota May Reach Normal Output in NA in July

How long will it take for vehicle production in North America to return to normal?

Toyota figures less than three months for its plants in the region, a source tells Reuters. The company isn’t talking.

The carmaker is just beginning to reopen its seven factories in the U.S., Canada and Mexico. Reuters says Toyota’s output from those facilities, which was zero in April, will reach less than 10% of normal volume by the end of this month. 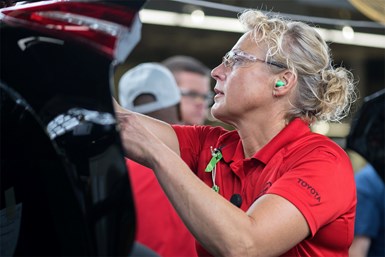 The company plans to slowly ramp up from there until it matches year-ago throughput in July, Reuters says. If all goes well, production will surpass last year’s pace by September, when the company goes into catch-up mode.

Reuters says Toyota hopes to make about 800,000 vehicles in North America from April through October. That would be one-third less output than the company achieved in the same seven-month period last year.

There are likely to be some bumps along the way.

Whether Toyota’s supply base can successfully track the company’s assembly plans remains to be seen. And production levels will be driven by demand, which remains impossible to predict at this point.

All bets will be off for Toyota—and the rest of the industry—if the coronavirus pandemic comes storming back over the next few months, and health agencies impose new stay-home rules.

Looking to China for Clues

Other carmakers are expected to take it slow too. They’ve all had plenty of time to ponder the challenges of making their plants coronavirus-free. None wants a facility to become a new COVID-19 hotspot.

Carmakers with plants in China, which resumed operations weeks ago, will be studying the real-life experiences of those facilities. For now, China’s auto industry offers the world’s best clues about the process of gearing up operations under a host of new sanitizing activities that will affect workers and production.