Toyota Motor Corp. is working with researchers from MIT to help reduce vehicle collisions at busy intersections that have obstructed views and no traffic light.
#Toyota

Toyota Motor Corp. is working with researchers from the Massachusetts Institute of Technology to reduce vehicle collisions at busy intersections that have obstructed views and no traffic light. 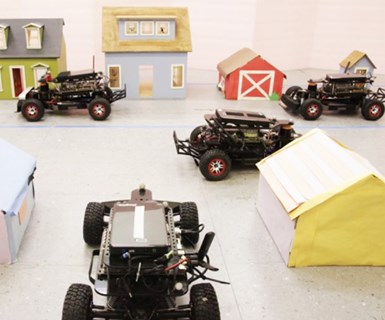 Tests of more than 100 remote-control cars found the software developed by the team was more than 70% effective in eliminating accidents when turning left into an intersection. The research was published in the IEEE journal Robotics and Automation Letters.

The authors say the technology could eventually be used in automated vehicles or in conjunction with advanced driver assist systems. Citing U.S. Dept. of Transportation data, the researchers note that one-third of fatal traffic accidents and 23% of fatal crashes occur at intersections.

Using advanced modeling software, the Toyota-MIT system estimates the risk of potential collisions and other traffic disruptions, then recommends how a vehicle should proceed at an intersection—stop, pull forward or drive into it. Algorithms take into account visual obstructions, sensor variances, the speed of approaching vehicles and the expected level of attentiveness of other drivers.

Risk levels are updated continuously based on a vehicle’s position at the intersection and the surrounding conditions. In some cases, vehicles may be prompted to inch ahead until the risk estimate is low enough to proceed through an intersection.

The model considers how long it will take a vehicle to steer a preplanned path through the intersection. The researchers note that lingering too long at an intersection also can increase the likelihood of a car being struck.

MIT says the tests indicate the software is robust enough to use in fully autonomous test cars in the near future. But the researchers caution that much more rigorous testing—including such risk factors as pedestrians—is needed before the technology is ready for production vehicles.

A simulation video can be viewed HERE.