When Toyota teamed up with Japanese tech giant SoftBank two years ago to form Monet Technologies, the partners had clear goals for the joint venture. Monet (short for mobility network) was to focus on applications for autonomous ride-hailing and delivery services. 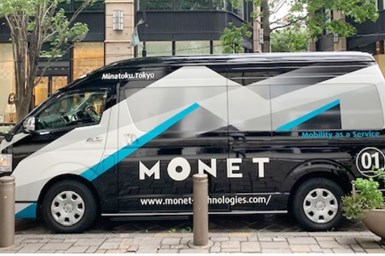 A lot has changed since then. Fully automated vehicles have lost their luster (at least for the short term) and COVID-19 has threatened the future of ride-hailing.

As a result, Monet quickly adapted its mission, which is evident in a pair of prototype models the company unveiled this week.

The vehicles—both of which are modified versions of Toyota’s Asian-market HiAce light commercial van—feature reconfigurable interiors, including one that is designed to protect passengers from spreading viruses to each other. Neither offers autonomous vehicle capabilities.

One of the vehicles is outfitted with a “personal ventilation kit,” which Monet says was developed to help combat the coronavirus. 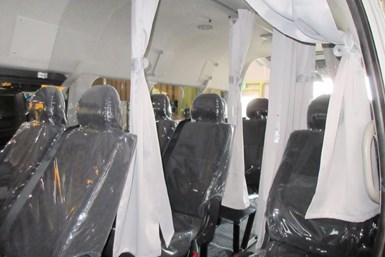 The design includes a partition wall between the front and rear compartments. The latter is divided into five zones that can accommodate a total of eight passengers.

Other amenities include dividing curtains and vinyl seat covers, which can be quickly removed and cleaned between rides. There also are individual intercoms for each passenger and a non-contact body scanning temperature device.

The van includes a proprietary forced ventilation system that pumps in outside air and distributes it directly to each passenger, without circulating through the cabin, via ceiling vents. But, Monet says, the system isn’t a guaranteed infection prevention measure.

The package adds about $6,7000 to the cost of the HiAce. Monet aims to begin selling a limited number of the vehicles in Japan later this year. The vehicle is intended to be used for on-demand shuttle applications, including transportation to and from hospitals.

The other version of the van has a flexible cargo area that can be quickly reconfigured for different uses, according to Monet. 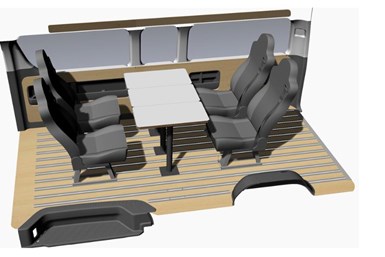 Rear seats can be moved along a series of sliding rails. Or they can be removed entirely and replaced with a worktable. The vehicle also can be equipped with power supplies, special lighting, monitors, air purifiers and additional USB ports.

Sales are due to start early next year.

“We will continue to work together with companies and local governments to solve social issues through MaaS and create new mobility services,” says Monet CEO Junichi Miyagawa.