Fully autonomous vehicles need to know precisely where they are at all times relative to the road and surrounding environment. We're talking within a few inches, opposed to as much as 15 ft with current GPS technology.

Efforts are well underway to create high-definition maps of major markets around the world. But the process, which typically has used dedicated survey fleets equipped with pricey lidar sensors, is time-consuming—and the maps can quickly become outdated.

Toyota is developing new techniques that promise to be faster and cheaper. 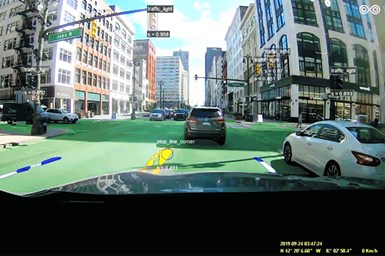 The system is accurate to within 25 cm, according to the partners. To date, they have mapped Tokyo and six international cities.

Another partnership with Carmera has mapped Tokyo and two unnamed U.S. cities. Teaming consumer-grade dash cameras with Camera’s computer vision and processing technologies, the system achieved a relative accuracy of 40 cm, which TRI says is a significant improvement over conventional camera-based systems.

Toyota also partnered with TomTom and HERE Technologies to demonstrate how data can be shared and updated across different mapping platforms.

In the concept, lane markings and other data collected from vehicle sensors via TRI-AD’s automated mapping platform are automatically converted and applied to update TomTom’s cloud-based HD map.