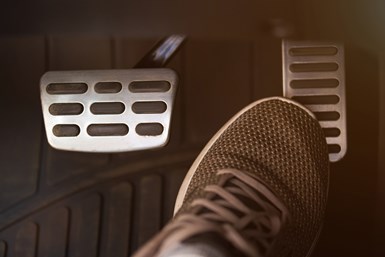 Toyota says it has developed a new system to help prevent so-called sudden acceleration, where drivers inadvertently step on the accelerator instead of the brake.

The carmaker plans to launch the technology this summer as an option on unnamed models in Japan.

During the development process, Toyota evaluated accidents in which the cause was determined to be pedal misapplication—particularly cases where the accelerator pedal was fully depressed (like stomping on the brakes if they didn’t seem to be working properly).

The characteristics of these situations were compared with “big data” collected from Toyota connected vehicles in Japan. This allowed the carmaker to create an algorithm that can differentiate between proper and “abnormal” rapid acceleration events.

In situations where it isn’t likely to be the driver’s intent, acceleration is suppressed. The system is designed to work during relatively low-speed maneuvers (up to about 19 mph), regardless if there is an obstacle in the car’s path.

Toyota says the rate of unintended acceleration has increased in recent years as Japan’s population ages. It notes that annual fatalities in the country involving drivers who are 75 or older has more than doubled in the past 12 years to 791 deaths in 2019. Mistaking the accelerator for the brake is said to be a leading cause.

But the issue is hardly a new one. Nor is it limited to older drivers or a specific region or brand. Reports of sudden acceleration have plagued the industry for decades, dating back to a wave of complains in the 1980s that nearly drove Audi out of the American market. In that case, NHTSA eventually attributed the problem to driver error—mistakenly pressing the accelerator when operators thought they were hitting the brakes.

Toyota had its own problems in 2009-2010, when some 89 deaths were linked to the issue. No defects were found, but the automaker recalled more than 10 million vehicles to fix sticky accelerator mechanisms and poorly designed floor mats that could interfere with the gas pedal.

Toyota says it has made several improvements in recent years designed to prevent unintended acceleration. These include:

The new technology will be part of the Toyota Safety Sense package, which includes a variety of driver-assist technologies. Toyota also plans to share the operational logic of its latest acceleration suppression system with other carmakers.