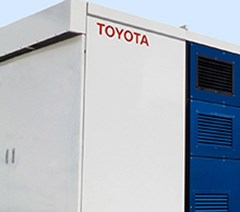 Comprised of two fuel stacks from a Mirai fuel cell car, the stationary generator has a rated output of 100 kW. The system also includes a power control unit and storage battery.

Toyota will run the generator continuously to test the system’s energy efficiency, power stability, consistency, durability and maintenance requirements. The carmaker then plans to install fuel cell generators at other global facilities.

In addition to the Mirai, the company is developing fuel cell-powered trucks and buses. Toyota also uses fuel cell forklifts in some factories.