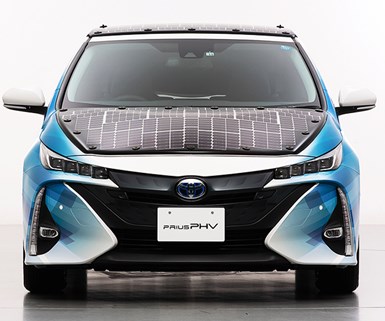 The photovoltaic cells developed by Sharp Corp. are thinner and more efficient than the roof-mounted Panasonic units currently offered on the Prius in select markets. That system—which helps power auxiliary components while the car is running and cab partially recharge the battery when parked—boosts fuel efficiency by as much as 10% on sunny days.

The new Sharp cells have an efficiency rate of 34% and can generate about 860 watts of electricity, according to Toyota. This compares with 180 watts and a 22.5% rating for the current Panasonic array. 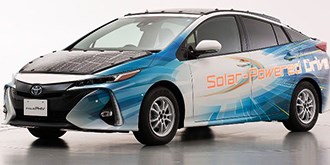 The new solar cells are about 0.03 mm thick, which Toyota says allows them to be form fitted to the car’s body panels. The overall system adds about 180 lbs to the car.

Toyota officials tell Reuters that production applications are “years away.” Significant cost and weight reductions are needed before that happens, they acknowledge.