In addition to sticking balloons to your head or sparking a shock when shuffling your feet on carpeting, static electricity can be used in a number of commercial applications. Examples range from air fresheners and pollution control to Xerox machines and automotive painting. 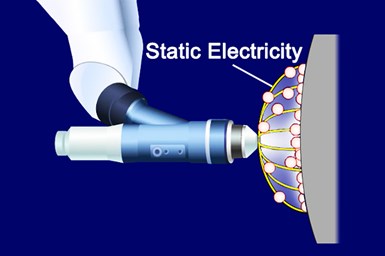 In the case of the latter, Toyota has developed a new process that the company claims is the most efficient in the industry, with a 95% coating rate. This compares with a less than 70% efficiency for conventional air atomizers. The company didn’t say what the typical efficiency is of other electrostatic devices.

Toyota expects the improved efficiency will reduce carbon dioxide emissions during the painting process by 7%. In addition, the carmaker says it will be able to use a smaller collector for paint waste. This, in turn, will enable more compact paint lines.

The tip of the Toyota system has a rotating cylindrical head. Some 600 grooves are inserted into the tip, which is rotated to create a centrifugal force. This induces paint to flow into the grooves and atomize through static electricity.

The atomizer constantly monitors current variations and automatically controls voltage accordingly. As a result, Toyota says, the system maintains a constant distance—and particle size—of about 10 cm between the cylindrical head and the vehicle to adjust for curves and other body variations.

The carmaker is introducing the technology at its Takaoka and Tsutsumi plants in Japan. Other global facilities will gradually convert to the new process in coming years.

In addition to its own plants, Toyota aims to license the airless system to other companies.