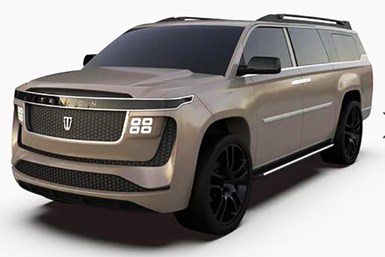 The company, which was formed in 2012 by engineering graduates from IIT Bombay, is developing a high-powered, full-size SUV that carries a starting price of $140,000.

Triton has begun taking $5,000 deposits for the vehicle, which is dubbed the Model H. The first 100 customers will get a Founder's Edition with unspecified bonus features.

Triton says the Model H will feature a 200-kWh battery that will enable the vehicle to drive an estimated 700 miles between charges. The proprietary battery system, which also can be configured to send power to a house or back to the grid, is said to be half the size and half the weight of conventional EV units.

Four electric motors will generate a combined 1,500 hp and propel the SUV from zero to 60 mph in 2.9 seconds, according to the carmaker. Towing capacity is listed at 26,000 lbs.

Sitting on a 130-inch wheelbase, the massive Model H stretches 224 inches from bumper to bumper and weighs a hefty 5,300 lbs. It is 81 inches wide, 74 inches tall and can accommodate eight adults with three rows of seating and 200 cu-ft of cargo capacity.

The interior is loaded with touchscreens for passengers to use in all three rows. The panoramic glass roof can be fitted with solar panels to help power auxiliary features.

A Dose of Reality

If this all sounds too good to be true (except the price), you’re probably right.

Triton plans to produce the vehicle in the U.S. (possibly with parts made in India to reduce costs) but didn’t say where or when this might happen.

In recent years, there have been dozens of companies espousing grandiose plans for breakthrough EVs. Few have come to fruition. And many of these have been well-funded and attracted top-level talent from traditional carmakers.

Triton EV’s website describes its automotive team as being “car enthusiasts who design and build products for other car enthusiasts.” The group reportedly built India’s first Formula E electric race car. But none appear to have come from the auto industry.

As of now, the Model H only exists in design renderings. This may be as far as it gets.