President Donald Trump flippantly suggested today that the European Union was close to agreeing on a 25% tariffs on German luxury cars shipped to the U.S.
#europe

President Donald Trump flippantly suggested today that the European Union was close to agreeing on a 25% tariffs on German luxury cars shipped to the U.S. 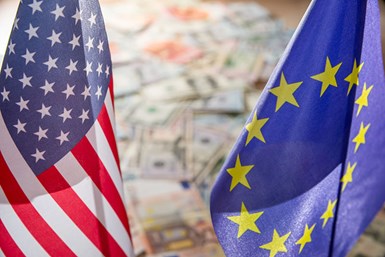 Trump delivered the zinger after signing a deal that will allow more American beef to be shipped to the EU, Bloomberg News reports. He returned to the podium and announced, “We’re working on a deal where the European Union will agree to pay a 25% tariff on all Mercedes-Benzs, BMWs coming into our nation, so we appreciate that.”

Trump quickly continued, “I’m only kidding.” He gestured toward the startled EU negotiation team, adding, “They started to get a little bit worried,” before walking out.

The subject of special tariffs on cars is no laughing matter to Germany’s auto industry. It has warned for a year that such a tax would have a huge impact on their export-based sales volumes. Trump has raised the threat of 25% levy whenever he feels that trade talks with the EU are stalling.