The next-generation Hyundai Tucson was expected to be unveiled at the Detroit auto show in June. That’s not happening, as the entire show was canceled due to the coronavirus.

In the meantime, Hyundai has found a reason to celebrate the first three iterations of the Tucson, which was introduced globally in 2004.

Cumulative sales for the compact crossover recently topped the 1-million mark in the U.S. Incidentally, that’s a little more than the entire population (about 994,000) of the greater metropolitan area of Tucson, Ariz., the city for which the vehicle is named.

Globally, Hyundai has sold nearly 3.6 million Tucsons. The U.S. is the largest market.

Big Seller in a Small Package

The Tucson is Hyundai’s second-most-popular model, trailing only the Elantra small car in the U.S. It slots below the Santa Fe and Veracruz in the carmaker’s growing crossover lineup.

Here’s a look back at the first three generations of the Tucson. 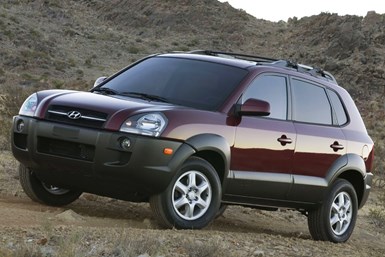 Built on the Elantra platform, the inaugural Tucson was praised for its styling, long list of standard features—including six airbags—and extended warranty.

Buyers could choose between a 139-hp, 2.0-liter 4-cylinder engine and a 2.7-liter V-6 that upped output to 173 horses, mated with either a 4-speed automatic or 5-speed manual transmission. 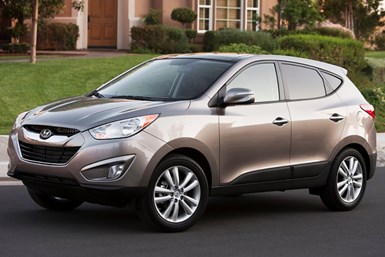 Renamed the ix35 in most markets outside the U.S., the second-generation Tucson introduced Hyundai’s “fluidic sculpture” design language.

The redesigned model was more than three inches longer than its predecessor. The V-6 was dropped in favor of a 2.4-liter four-banger that kicked out 176 hp. 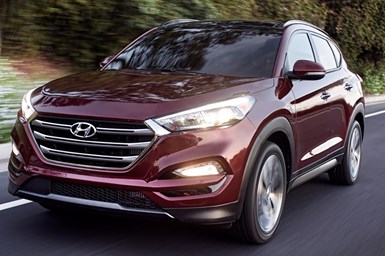 The current Tucson features an evolutionary design (fluidic sculpture 2.0) that was updated in 2018 with a new cascading grille. It’s also larger and roomier, with more interior appointments and safety equipment.

A turbocharged 1.6-liter engine generates 175 hp and 195 lb-ft of torque. The engine is paired with a 7-speed dual-clutch transmission to help boost fuel efficiency.

The fourth-generation Tucson still is expected to bow later this year. It will be based on last year’s Vision T concept and likely will include a hybrid-electric variant and possibly an N-Line performance model.

Hyundai reportedly will build the new Tucson at its Montgomery, Ala., plant. The current U.S. model is imported from South Korea. The carmaker also produces the vehicle in Algeria, Brazil, India and the Czech Republic.