In its latest partnership, the 6-year-old startup is teaming up with Volkswagen Group's Traton commercial truck unit. As part of the deal, Traton will take an unspecified minority stake in TuSimple.

The two companies will work together to apply TuSimple’s Level 4 autonomous driving technology to heavy-duty trucks sold under Traton’s MAN and Scania brands. 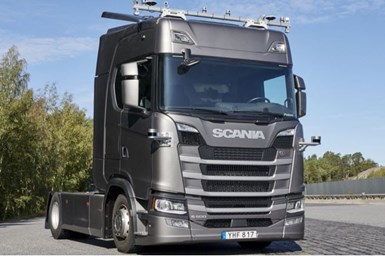 Their first joint project will be a pilot program in Sweden, which will test Scania trucks modified to operate without human intervention under certain conditions on a route between Sodertalje and Jonkoping.

Traton aims to expand tests throughout Sweden, Germany and other European countries in the future. The company’s brands have combined annual sales of some 242,000 buses and trucks.

TuSimple has been testing its technology on public roads in the U.S. since 2015.

Both Traton and TuSimple have their own partnerships with Navistar International.

Traton already owns a nearly 17% stake in the U.S.-based truckmaker and has offered $3.6 billion to buy the rest. Navistar, meanwhile, acquired a minority stake in TuSimple in July as part of a broader development agreement.

TuSimple previously has raised about $300 million from investors such as UPS, Nvidia and Chinese tech firm Sina. The company also has partnerships with Amazon Web Services, Sony and ZF.

“Our partnership with Traton Group accelerates the introduction of autonomous truck technology to new international markets, and we look forward to our global partnership,” notes TuSimple President Cheng Lu.

Commercial trucks are well suited for autonomous operations because they typically operate over fixed routes, which can be easily mapped and updated with high-definition systems.

Trucks also stand to benefit from the safety and fuel efficiency benefits enabled by self-driving operations. In recent tests, TuSimple showed that its autonomous technology can help reduce fuel consumption by 10% through more efficient acceleration and braking.

Autonomous operation also could help alleviate the dearth of truck drivers. Analysts estimate a shortage of 60,000 drivers in Germany alone.