Lack of attention and setbacks have derailed a promising start

Uber’s Advanced Technology Group is at a crossroads.

The autonomous vehicle unit, which was spun off as a separate subsidiary in April 2019, lags both traditional carmakers and startups in terms of progress. 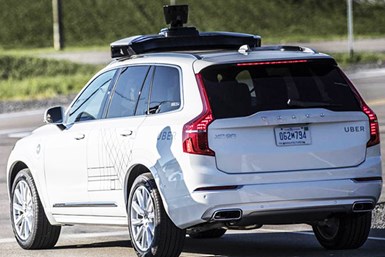 Alternatives range from ramping up development efforts with current partners— and attracting new investors—to open-sourcing the project to software coders around the world, according to the news agency, which cites several sources.

ATG’s autonomous test fleet consists of fewer than 10 vehicles per week on public roads in Pittsburgh and Washington, D.C.

Rival Lyft also has completed more than 100,000 autonomous rides in Las Vegas in partnership with Motional, the new joint venture created by Aptiv and Hyundai. Other startups—including Zoox, which was recently acquired by Amazon—also are accelerating and launching their own test programs.

ATG was once poised to be a leader in self-driving vehicles.

But a string of setbacks, including losing a $245 million trade secret lawsuit filed by Waymo (former employee Anthony Levandowski was fined $179 million and sentenced to 18 months in prison) and the high-profile 2018 death of a pedestrian struck by an Uber test car operating in autonomous mode with an inattentive backup driver, has left the company reeling.

The situation was exacerbated this year in the wake of COVID-19, when ATG was forced to temporarily suspend its test programs.

Uber’s two largest shareholders, SoftBank and Benchmark Capital, are urging Khosrowshahi to find more investors for ATG. The business, which is burning through about $500 million per year, is on pace to exhaust its current funding by the end of 2021, according to Bloomberg.

Toyota also is one of Uber’s largest investors. In addition, Toyota and its Denso affiliate contributed a combined $667 million directly into ATG last year.

Uber also has non-equity partnerships with Daimler and Motional. But both of those programs are on hold, Bloomberg says.

Meanwhile, ATG is struggling to develop its own technology. The company, which had been licensing software from Carnegie Melon University since 2015, had hoped to have its own system ready this year. Now it doesn’t expect to reach that goal until at least the end of 2021.

Attracting new investors and working with Toyota and Denso would provide much needed resources to help Uber.

But open-sourcing ATG’s technology could provide a quicker fix. If successful, analysts suggest, the collaborative move could increase Uber’s stock price by as much as 20%.

Earlier this year, Khosrowshahi reportedly directed ATG chief Eric Meyhofer to study the idea. Meyhofer, however, is said to have deemed such engineering crowd-sourcing as being “too complicated.”

No matter where it comes from, Uber needs help to develop the necessary technology to enable future robo-taxi applications.