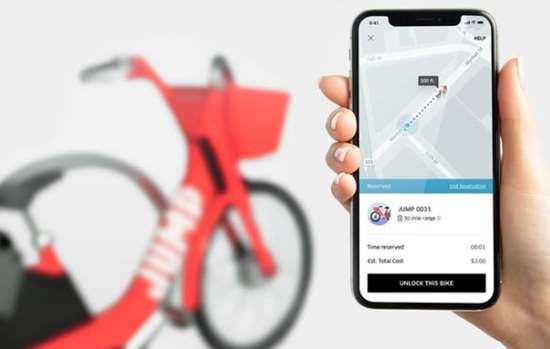 Earlier this week Uber Technologies acquired Jump Bikes, a New York City-based “dockless” bicycle rental company. The deal, which is estimated to be valued at more than $100 million, is Uber’s first acquisition since Dara Khosrowshahi became CEO last August and is part of his plans to expand into new markets and mobility options.

Uber say the goal is to offer multiple modes of transportation within an integrated app, to give users options to fast and affordable transportation and make it easier to live without owning a car.

Jump and other dockless services allow members to lock and leave a bike anywhere public bike parking is permitted. By comparison, traditional bike-sharing services such as Capital Bikeshare, Citi Bikes and Ford GoBikes have designated racks where users can pick up or drop off a bike.

Launched in 2010 as Social Bicycles by founder Ryan Rzepecki, Jump now operates 15,000 bicycles in 40 cities worldwide. The startup raised $10 million last autumn and has been partnering with Uber on a pilot program in San Francisco since January.

Jump’s distinctive neon-red bicycles are equipped with GPS tracking, electric-assist capability and have built-in U-bar locks that allow them to be secured to existing bike racks as well as to light poles, benches and other street fixtures. Users can locate and reserve nearby bicycles via a smartphone app. At the end of a ride, bikes are locked in designated zones shown on the app’s map.

The pilot program in San Francisco involves 250 electric-assist bicycles, with rental rates starting at $2 for 30 minutes. Each bike is used about seven times per day with an average ride distance of 2.6 miles. Uber plans to use data from its car service to help place bicycles in high-demand areas to increase utilization rates.

In addition to San Francisco, Jump has some 200 bikes stationed in Washington, D.C., where the company plans to double its presence in coming months. Competitors such as Ofo, Spin, Mobike and LimeBike also are expanding their own dockless networks, which already has led to overcapacity and other problems in some areas. Critics point to images of piles of abandoned bikes—including some that were put in trees or streams—in China and other early adapters

For his part, Khosrowshahi describes Jump as “a perfect fit” for Uber’s expanding portfolio. In addition to its core car-hailing service, the company operates UberEats (food delivery), UberHop (micro-transit shuttle service), UberPool (ride-sharing) and is exploring a variety of other mobility-as-a-service systems. In some cities Uber receives government subsidies to supplement public transportation.

Uber eventually aims to launch autonomous taxi services—both in the air and on the ground. But the company was forced to put the brakes on those efforts following a fatality last month in Arizona.

Uber also has backed off its ambitious globalization strategy, which Khosrowshahi concedes waged “too many battles” on multiple fronts with too many competitors. In the past two years Uber has sold its operations in China and Russia. A similar deal announced earlier this month with rival Grab in southeast Asia has been put on hold, pending regulatory review.

The bike-sharing initiative represents a new business model for Uber. Unlike the cars on its ride-hailing network, which are privately owned by individual drivers, Uber initially will own and maintain the Jump bicycles. But Khosrowshahi says Uber could partner with third-party owners as the market matures.

Khosrowshahi hopes the various businesses will eventually yield a profit for Uber, something the company has failed to achieve yet. Last year the company lost  $4.5 billion and was besieged by a variety of investigations, lawsuits and scandals involving its corporate culture and business practices.

Despite the promise of Jump and other ventures, turning Uber’s financial fortunes around will be much more involved than merely riding a bike.