TTP, an engineering firm based in Cambridge, England, is developing a self-cleaning system for sensors used in advanced driver-assist and autonomous vehicle technologies. 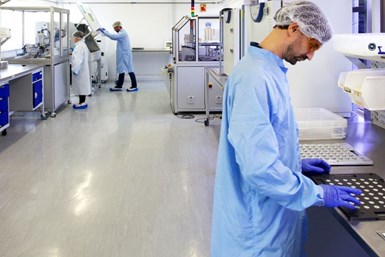 The initial focus is on lidar, which uses focused laser pulses that can be rendered useless by dirt and other small obstructions on the face of the lens, explains Tom Jellicoe, who heads TTP’s Autonomous Driving team.

Currently, liquid jets and wipers are used to clean lidar. That’s fine for prototype self-driving cars, which are serviced regularly at central facilities.

But in real-world applications, Jellicoe says, such systems would be impractical because fluid reservoirs would need to be replenished too frequently.

Ultrasonic sensors measure changing vibrations caused by dirt and other substances on the face of the lidar.

This triggers an atomization process that sprays a fine mist on the lens. Jellicoe says the high-speed spray is designed to quickly dissolve dirt and repel any remnants without using wipers.

The technology is similar to how semiconductor wafers and industrial printers are cleaned. Atomization also is used in some fragrance dispensers.

Another purported benefit is the system requires very little power. Jellicoe likens it to that of a doorbell.

TTP is developing the technology, which needs to be designed for the specific geometry of different systems, for an unnamed lidar startup company.

“It looks very encouraging,” says Jellicoe, who describes the system as being in late-stage development. He expects to announce a formal contract within the next few months.

In addition to lidar, Jellicoe says the technology also could be applied to radar and exterior-mounted cameras.

Several other companies also are developing new and unique ways to keep sensors clean. Ford is testing an air deflector that the company claims prevents bugs and other objects from flying into the sensors.

TTP, which formed its 16-member Autonomous Driving team two years ago, also is working on several other lidar-based technologies.

One uses diffractive optics rather than refractive, which promises to significantly reduce costs. The company aims to have a next-generation prototype ready within two years.