Using a micro-factory to make 10,000 vans for UPS
#europe

British startup Arrival plans a “blank check” merger in the U.S. that will value the would-be maker of electric buses and delivery vans at $5.4 billion.

The London-based company expects to merge with New York City-based CIIG Merger Corp., a special purpose acquisition company, in the first quarter of 2021. 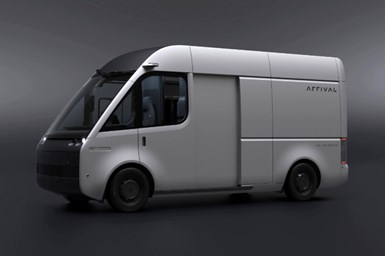 CIIG will emerge from the initial public offering with a 12% stake in Arrival, whose shares will trade on the NASDAQ. The new company is expected to net about $660 million from the IPO.

The British company is 88% owned by Hyundai and UPS. BlackRock, also headquartered in New York City, owns 7.5% of CIIG, and invested $118 million in the EV maker last month.

Arrival aims to produce its vehicles using highly automated micro-factories that are erected near the customers they supply. The first two such plants will be set up in South Carolina and the U.K. next year.

The company says its unusual approach to production makes its vehicles competitive in cost to piston-powered vehicles and cheaper than comparable electric vans and buses.

Arrival is preparing to fill an order from United Parcel Service for 10,000 electric delivery vans. The company says the vehicles will be “autonomous ready” and can be equipped to operate robotically within depot complexes to, for example, drive themselves to and from charging stations.

The company also is marketing a modular city bus concept that features a glass roof, wrap-around LED screens to indicate seating and route details, and a smartphone app that allows riders to request a stop and get real-time updates on pickup times.

Arrival claims it has more than 1,300 employees in Germany, Israel, the Netherlands, Russia, the U.K. and the U.S.