The word “ultimate” is used so often when describing new vehicles and technologies that it almost becomes meaningless.

But in some cases, it seems appropriate.

The upcoming Gordon Murray Automotive (GMA) T.50 supercar is one of those cases.

Supercar Successor at its Best

Legendary Formula One designer and lightweighting specialist Gordon Murray, who heads GMA, isn’t shy about throwing around “ultimate” superlatives about the T.50, which is a spiritual successor to the 1990s-era F1 that he designed for McLaren. 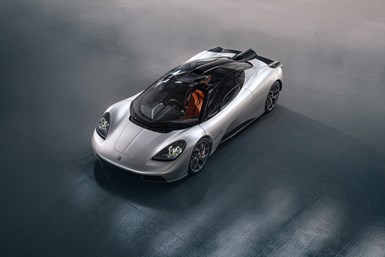 In fact, Murray claims the T.50 bests the iconic F1 “in every conceivable way.” That’s a lot to live up to.

In a press release issued in conjunction with this week’s official unveiling of the T.50, Murray hails the new model as the “ultimate analog supercar.” Meaning it eschews the latest digital amenities, including touchscreens, telematics and other electronic systems.

But he doesn’t stop there. Ultimate also is used to describe several of the supercar’s features, including its:

GMA goes so far as to say that the T.50 is the ultimate driver’s car. At the same time, the company touts the car’s “everyday usability”—at least for a supercar.

The ultimate label doesn’t come cheap. Pricing of the T.50 will start at more than $3 million. 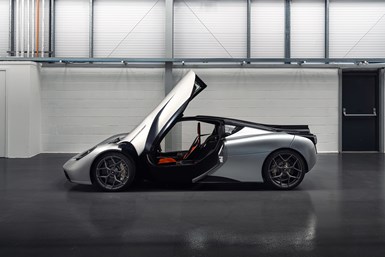 In addition to customized options, owners will have a fitting session to tailor the positions of the driver’s seat, steering wheel and foot pedals to their bodies and preferences.

Stretching 173 inches from bumper to bumper, the T.50 is about the size of a Porsche Boxster. The rear-wheel-drive car sports a mid-engine layout, scissor-opening doors and a center driver’s seat ahead of two rear seats.

GMA plans to launch production of the T.50 (named to celebrate Murray’s 50 years in the business) late next year, with deliveries to start in early 2022. Production will be limited to 100 units, most of which already has been reserved.

Built on a carbon fiber tub with carbon fiber panels, the T.50 will tip the scales at just 2,173 lbs. That’s 300 lbs less than the F1 and about one-third lighter than rival supercars.

The weight savings was achieved by taking a comprehensive approach to the vehicle’s development. The design team met weekly to weigh in on every component and part, including some 900 brackets, bolts and fasteners. There are no plastic parts in the car.

GMA also worked extensively with its suppliers (all of which are based in the U.K.) to cut weight. The carbon fiber tub chassis, which is supplied by Formaplex, weighs about 330 lbs. That’s with all the doors and other body panels attached. The design features an aluminum honeycomb core, which GMA says enhances structural rigidity.

Other dietary highlights include the V-12 engine and 6-speed manual transmission, both of which are mounted to the chassis to provide “semi-structural” support. The construction saves about 55 lbs over traditional powertrain mounts, according to the carmaker. In addition, the Cosworth engine and transversely mounted Xtrac gearbox are 22 lbs and 132 lbs lighter, respectively, than their F1 counterparts.

Carbon fiber also is used in the driver’s seat, which weighs in at just 15 lbs. The two rear seats are less than 7 lbs each.

But it’s not all about weight. The engine and transmission also deliver the performance goods. 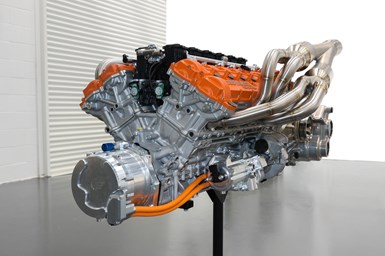 The naturally aspirated 3.9-liter V-12 kicks out 653 hp and 344 lb-ft of torque, while redlining at 12,100 rpm. That works out to about 167 hp per liter and even more impressive power to weight ratio. The engine features dry sump oiling, which GMA says will enhance hard cornering.

Drivers also can select a GT Mode, which limits output to 592 hp and redlines at 9,500 rpm, to enhance driveability.

The transmission features five close ratios that are geared for acceleration, while the longer sixth gear is designed for cruising. GMA says the system was meticulously honed to deliver crisp gear changes with a short throw.

The double-wishbone aluminum suspension features inboard-mounted coil-over springs. The rear unit is mounted directly to the transmission housing, while the front mountings are bonded to the chassis.

The T.50 also gets a large, electrically driven (48-volt) fan that can vary downforce based on vehicle speed, road conditions and whether the car is cornering or driving in a straight line.

Inspired by Murray’s Brabham BT46B race car, the T.50’s 15.7-inch fan can spin up to 7,000 rpm. It works with the car’s active rear spoilers and diffuser to generate downforce by rapidly accelerating the flow of air under the car.

Six settings are available. Two of them work automatically, depending on the car’s speed and driver input. The driver can select the other four based on road conditions and preference.

In V-Max Boost mode, the V12’s integrated starter-generator is run flat out to boost output by 30 hp for up to three minutes. Braking mode can double downforce and shorten braking distance by 98 feet from 150 mph, according to GMA.

Although he doesn’t actually say ultimate in this case, the gist is clear.