General Motors has landed a $214 million contract to supply the U.S. Army with infantry squad vehicles (ISVs) based on the 2020 Chevrolet Colorado ZR2 pickup truck.

The deal is one of the first big wins for the carmaker’s 3-year-old Defense subsidiary.

The all-terrain troop carrier is designed to provide rapid ground mobility in remote and dangerous battlegrounds. 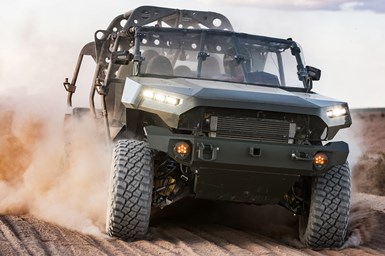 Capable of transporting as many as nine soldiers, the Colorado-based ISV is light enough to be sling-loaded from a UH-60 Blackhawk helicopter and compact enough to fit inside a CH-47 Chinook helicopter for air transportability, according to GM.

Featuring an occupant and cargo "superstructure," the military vehicles will be powered by a 186-hp 2.8-liter Duramax diesel engine mated with a 6-speed automatic transmission.

GM says 90% of the parts will be off-the-shelve components, including Multimatic dual spool-valve dampers and Chevrolet’s performance suspension. The durability and off-road performance of the parts has been tested on the Colorado during multiple Best in the Desert races through Nevada.

GM, which is partnering with Ricardo Defense on the project, beat out two other bidders for the contract. The initial deal calls for GM to supply about 650 vehicles, with the potential for another 1,400 to be delivered over an eight-year period. 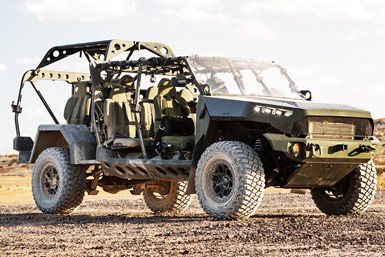 The carmaker sold its previous 53-year-old defense business (General Motors Defense) to General Dynamics in 2003, but it has continued to supply engines and transmissions to the military.

The initial focus of the new GM Defense unit has been to repurpose fuel cell technologies, including modified versions of the Colorado and the larger Silverado pickup. Advantages of such vehicles include quiet operation, strong low-end torque and the ability to generate electricity and water in remote areas.