Audi is giving the Q5 crossover vehicle (the carmaker’s top-selling model in the U.S.), a midcycle makeover.

Highlights include a redesigned front-end, more driver assistance technologies, a new infotainment system, personalized OLED taillights and a slight power increase. The 2021-model midsize crossover is due to arrive in the U.S. this autumn.

Reflecting Audi’s latest design language, the exterior facelift features a revamped grille that is thinner, wider and lower than that of the current Q5. 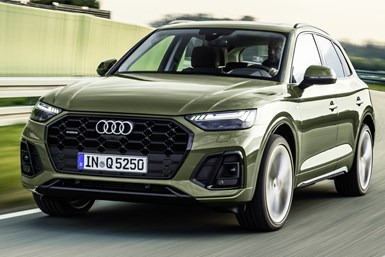 Other changes include taller air intakes with trapezoidal inserts, a larger front bumper and updated LED headlights (matrix units are available on in Europe) with new daytime-running lights.

The beefier bumpers stretch the Q5’s length slightly to 189 inches. Height and width remain the same.

The profile sports a new side sill that’s designed to create a lighter look, according to Audi. At the rear, there’s a new horizontal diffuser and trim elements to connect the taillights.

More importantly, the Q5 gets optional OLED (organic-light-emitting diode) taillights on top-end variants. The technology, which already is available on the TT RS sports coupe, provides more consistent lighting as well as a greater level of personalization—Q5 buyers can choose from three signature patterns that are displayed when starting and turning off the ignition. 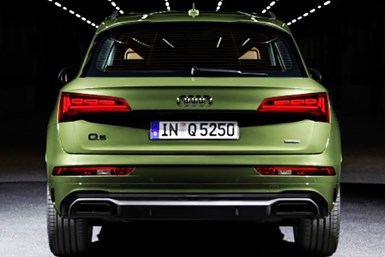 The rear lights also are equipped with a proximity sensor. The system automatically illuminates the lights if another vehicle comes within 6 ft of the rear bumper when the vehicle is stationary.

"OLED is the perfect technology for executing personalized light design with a high degree of precision and extensive variability,” says Stephan Berlitz, Audi's head of development for light innovation. “This technology offers all sorts of opportunities for further development."

The interior features Audi’s third-generation modular infotainment system with a 10.1-inch touchscreen and a new processor that is said to be 10 times more powerful than its predecessor. The technology enables over-the-air software updates, including to the now standard navigation system with real-time traffic updates and lane-by-lane images from Google Earth. 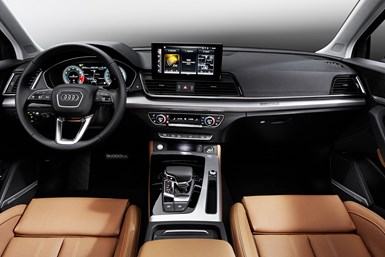 Users also can upgrade the instrument cluster with a reconfigurable 12.3-inch unit. A head-up display is available too.

When cruise control is activated, a predictive efficiency assist system automatically adjusts driving speed based on upcoming road conditions—including traffic, changing speed limits and topography. Audi claims the technology can reduce fuel consumption by as much as 10%.

The base Q5’s turbocharged, 2.0-liter 4-cylinder engine has been retuned to boost output by about 5% to 261 hp and 273 lb-ft of torque. The engine is mated with a 7-speed dual-clutch transmission. All-wheel drive is standard.

A new 12-volt mild-hybrid is expected to boost fuel efficiency.

The plug-in-hybrid variant is powered by 2.0-liter mill mated with an electric motor that generates a combined 362 hp and 369 lb-ft of torque.