UPS has been approved by the U.S. Federal Aviation Administration to operate commercial drones.
#tech

United Parcel Services of America Inc. has been approved by the U.S. Federal Aviation Administration to operate commercial drone delivery aircraft, which the company says is the nation’s first such certification. 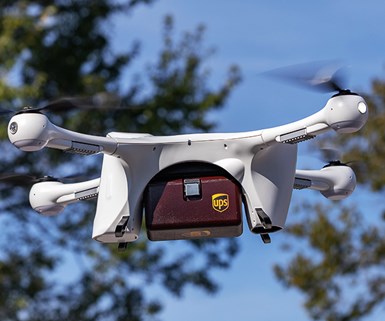 The delivery giant’s UPS Flight Forward Inc. subsidiary initially will use remotely controlled drones to deliver supplies to hospitals and other medical facilities.

The first certified drone delivery—with a Matternet M2 quadcopter—was made last week to WakeMed’s campus in Raleigh, N.C., following about 1,100 deliveries to the facility under an earlier pilot program. As many as 100 hospitals are expected to add the service in coming months, according to UPS.

The company aims to expand drones to its consumer delivery service in coming years. But this will require the FAA to drop restrictions that currently prohibit such flights in urban areas.

The new FAA certification allows Flight Forward to operate an unlimited number of drones and remote operators. The drones can carry more than 55 lbs, fly at night and be operated outside of a controller’s line of sight, none of which was allowed with earlier test drones. Each new route must be approved separately.