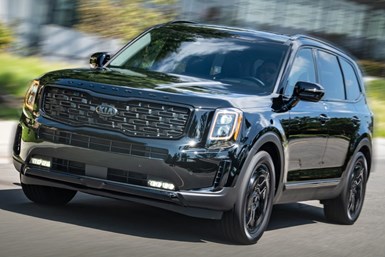 Quarterly domestic sales by Detroit’s Big Three carmakers dropped 8% to 1.72 million vehicles. The retail side of the business was strong, but not robust enough to offset huge declines in fleet sales.

Encouragingly, there were several brands that surpassed year-ago sales for the third quarter.

Among Asian marques, Acura advanced 2%, Kia grew 4%, Mazda jumped 7%, and Mitsubishi and Lexus each gained 2%. But all others continued to trail, by ratios ranging from 2% for Hyundai to 33% for Nissan.

Among European brands, third-quarter sales improved for Alfa Romeo (+17%), Porsche (+5%) and Volvo (+11%). The group’s higher-volume makes that have posted results fell short: Audi and BMW (each down 16%) and Volkswagen (behind by 8%).

For the year to date, U.S. passenger vehicle sales through the first nine months of 2020 were down roughly 19%.

Last year, U.S. sales totaled 17.1 million. Analysts don’t agree about how this year will turn out. Right now they predict a total somewhere between 13.9 million and 14.5 million.

It all depends upon whether the third-quarter recovery rate can be sustained through the fourth quarter. And that will hinge upon on ebb and flow of the COVID-19 pandemic and how the overall economy behaves.