New-car sales in the U.S. shrank more than one-third last month because of the coronavirus pandemic.

Specifics about last month’s results in the U.S. is tricky because most carmakers—including General Motors, Ford and Fiat Chrysler Automobiles—have switched to quarterly sales reports. But even those numbers are ominous.

GM says its U.S. sales in the first quarter fell 7%. Volumes at Ford and FCA each shrank 10%. Not so bad, you say? Well, not when you realize those declines were due entirely to really lousy sales in the last 14 days of the three-month period.

Among the handful of brands that did report March sales, the wreckage is more telling. Sales shrank between 19% at Kia to 51% for Acura. Again, the damage all came in the second half of the month. 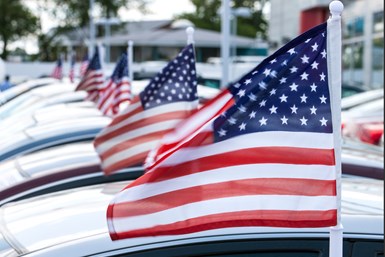 LMC Automotive calculates an 11.2 million annual sales rate for March. The firm says the pace could slow to 9 million in April, as the proportion of American under stay-home orders continues to grow.

Europe is dealing with the same dynamic, but it got started earlier. The region’s sales picture shows what’s in store for the American market.

March sales data from ACEA, the region’s auto industry trade group, won’t be released for another two weeks. But government and local trade group reports show that last month’s sales fell 72% in France, 86% in Italy and 69% in Spain.

On Wednesday, carmakers in Germany huddled (by phone, of course) with Chancellor Angela Merkel about strategies to restart production soon. Producers fret that some of their smaller suppliers won’t be able to ride out a shutdown for long without a big dose of U.S.-style government aid.

Even then, a breakout by one country won’t get far unless the rest of Europe (and its suppliers) are ready to go too. Analyst cautions that the revival, when it comes in Europe or anywhere else, may be rapid. But it won’t happen overnight.