That’s when General Motors, Ford and Fiat Chrysler Automobiles tentatively plan to reopen several of the U.S. plants that were idled on March 18 because of the coronavirus pandemic.

Sources tell The Wall Street Journal that the relaunch date also will apply to auto factories in states that have already lifted their stay-at-home orders. 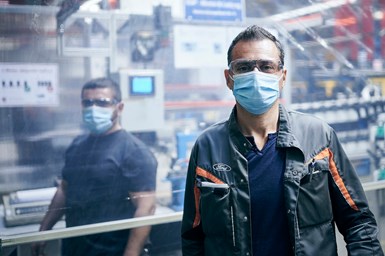 The May 18 date was arrived at through meetings by the Big Three carmakers with the United Auto Workers union and Mich. Gov. Gretchen Whitmer’s office, according to the newspaper. All three companies operate multiple factories in Michigan, where lockdown rules have been especially strict.

Details about new safety protocols in the affected plants are still being worked out with the UAW, which prodded the companies into last month’s shutdown, the sources add.

One big challenge will be to coordinate the restart of hundreds of suppliers, which would need to resume operations ahead of the assembly plants that use their components.

It isn’t clear how or if suppliers in Michigan and other states where lockdown orders remain in effect could resume operations sooner. The question also applies for suppliers to nonunion assembly plants, such as facilities that Toyota and Honda plan to relaunch on May 4 and May 11, respectively.

Ford Targets May 4 in Europe

Overseas, Ford confirmed today that it will reopen six European vehicle and engine plants on May 4.

Next week’s staged restart will begin at assembly plants in Saarlouis and Cologne, Germany; Valencia, Spain; Craiova, Romania; and at engine plants in Cologne and Craiova.

On May 18, Ford will reopen its engine plant in Valencia. Relaunch dates for the company’s two engine making facilities in the U.K. haven’t been decided yet.

All operations will begin at low volumes and focus on filling specific dealer orders, according to Ford. The company says a return to full production will take a few months.

As is the case for other carmakers, Ford’s output will be guided by customer demand, supplier readiness, national restrictions and the ability of Ford dealerships to reopen in key European markets.