New cars in the U.S. have never been more fuel efficient, according to the latest figures from the Environmental Protection Agency.

That’s quite a feat, since most of those new vehicles are powerful SUVs and pickup trucks, not little economy sedans. 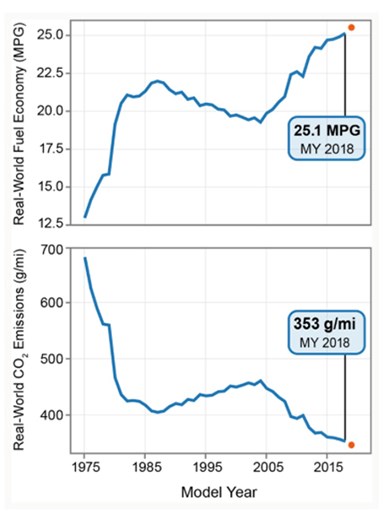 By way of perspective, new cars averaged a mere 12.6 mpg in 1975. Back then, cars also were nowhere near as clean—or as powerful—as they are today.

EPA has more good news. As fuel efficiency goes up, carbon dioxide emissions go down. Since 1975, CO2 emission per mile for new cars have plummeted 48% to an average 353 grams per mile. (That’s still high by European standards, where carmakers are trying to achieve an average of 144 g/mi.)

What is remarkable is that these impressive gains have come as the ratio of trucks to cars sold in the American market flipped from less than one-fourth in 1975 to about two-thirds now. It also has happened as average horsepower soared nearly 80%, according to EPA.

Among specific car companies, Honda is the fuel economy champ in the U.S., with a fleet average of 30 mpg for the 2018 model year. Close behind are Subaru and Mazda, tied at 28.7 mpg.

The numbers aren’t as great for Detroit’s Big Three carmakers. Their fuel economy results are below the overall market average because of the high ratio of big trucks they sell. General Motors leads the American contingent with a fleet average of 23.5 mpg. Ford and Fiat Chrysler Automobiles follow at 23 mpg and 21.7 mpg, respectively.

Even so, EPA’s figures show that just about all vehicle categories have been improving for 20 years. Leading the pack are sedans and wagons, which currently average 30.8 mpg.

It’s been tougher going for pickup trucks. That category has managed to push its fuel economy average to 19.1 mpg from around 16 mpg in 2000. Unfortunately, that’s no better than the average for pickups in the late 1980s.

Car companies who beat their greenhouse gas emission limits for a given year can “bank” the difference. Then they can either apply the credits to a year when their own performance isn’t so great or sell some to other manufacturers that need help.

All major carmakers finished the 2018 model year with credit balances. In fact, EPA says the group was within 1 gram per mile of meeting its CO2 emission limits without dipping into any banked credits at all.

Nearly 80% of accumulated credits will expire at the end of the 2021 model year. After that, new credits earned must be used within the following five years.

Which is about the time carmakers will truly begin to feel the pressure to hike sales of all-electric vehicles.