In this case, a return to normal traffic congestion and delays would be a welcome post-coronavirus sign
#oddities

Less traffic is usually a good thing—as in less congestion and less pollution. However, heavy volumes also are good indicator of economic health—or lack thereof when the roads are empty. 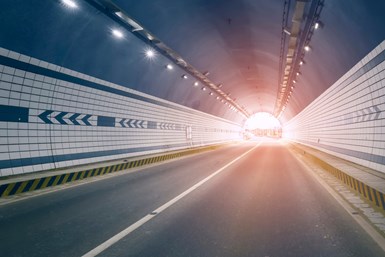 It isn’t surprising that traffic has lessened during the outbreak of the coronavirus. But it is noteworthy how much the volume has dropped—even before significant business closures and shelter-in-place mandates were instituted.

According to a report from Inrix, a Washington-based company that compiles and analyzes real-time traffic data, daily volume for March 14-20 fell an average of 23% compared with the corresponding days of the week for Feb. 22-28—and by as much as 40% in areas affected the most by the pandemic. 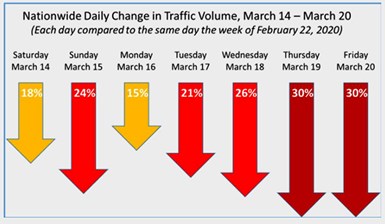 The downward trend started March 13. Following 16 straight days of increased traffic across the country, activity slipped 5% that Friday—yes, it was Friday the 13th—and has slowed further nearly every day since then. The last two days for the period both saw week-over-week declines of 30%.

In normal times, Inrix notes, daily changes in national volumes are negligible. A 5% change is unheard of. Needless to say, the last few weeks have been far from normal—and everyday activities aren’t expected to resume for at least several weeks.

The traffic changes correlated directly to spikes in COVID-19 cases and subsequent government actions taken to flatten the growth rate of the disease. The highest weekly reductions occurred in:

San Francisco implemented its shelter-in-place directive on the 17th. New York bars and restaurants were shuttered the night before, followed by a virtual city lockdown last weekend.

Inrix expects similar reductions in other cities and states as the coronavirus continues to spread and more work-at-home and travel-limitation policies are enacted.

Italy is another leading indicator of how bad it could get. The country, which has become the new epicenter of the disease, implemented a full lockdown on March 9. Traffic has plummeted 65% since then, including a 70% reduction in personal vehicle travel, according to Inrix.

On the plus side, long-haul traffic in the U.S. was flat last week. Inrix points out that this indicates that national supply chains are holding up.

Local commercial vehicle traffic also was down relatively low—compared with personal travel—with a 10% dip for the week.

While people are making less trips, the distance-per-trip is actually up slightly to 9.4 miles, Inrix says. Thanks to reduced congestion, the average trip is down about 4% to 17.8 minutes per ride.

Inrix plans to issue weekly report updates for the foreseeable future. But the company is looking forward to returning to its more traditional studies on congestion and volume growth, which it says will be "a sure sign of recovery."