A key enabler for autonomous driving systems is about to get a lot more affordable. At least for some applications.

Velodyne, the longtime leader in lidar technology, is launching a scaled-down system that it plans to sell for just $100 per unit. Dubbed Velabit, ​the new sensor will be available this summer.

For those wondering how significant this is, here’s something to consider: A Velodyne lidar sensor cost as much as $75,000 in prototype autonomous vehicles in 2017. That’s a staggering 99.7% reduction in three years!

Granted, it’s not exactly apples to apples. The earlier systems were for prototypes—i.e., ultra-low production runs. As volumes increased, costs have dropped dramatically.

Technology improvements, such as lower-cost solid-state devices, also have helped drive prices down. The latest lidar used in self-driving test fleets runs from about $1,000 to $10,000, making Velabit still at least an order of magnitude cheaper. 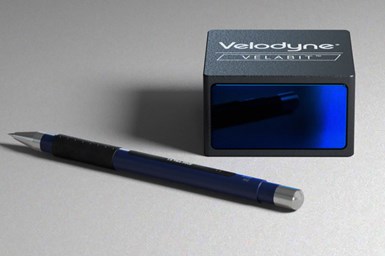 Velabit fits into a box that measures 2.4 x 2.4 x 1.38 inches, making it Velodyne’s smallest lidar ever. Not only does this enable greater in-vehicle packaging flexibility, it also could lead to applications in a variety of other devices—such as robots and drones—the supplier notes. (Waymo also is targeting non-automotive uses for its lidar.)

But don’t expect Velabit’s performance to equal that of roof-mounted 360ﹾ spinning arrays. Velodyne calls it a mid-level system with a range of about 320 ft—half that of a top-end unit—and fields of view of 60ﹾ (horizontal) and 10ﹾ (vertical).

Velabit can serve as a stand-alone sensor for low-speed functions, including cross-traffic detection and automatic emergency braking. High-speed functions require it to be paired with other lidar and/or radar and cameras.