The ambitious plan calls for the startup, which only began customer deliveries in its home market in August, to expand internationally—including to the U.S., Europe and Russia—in 2021. 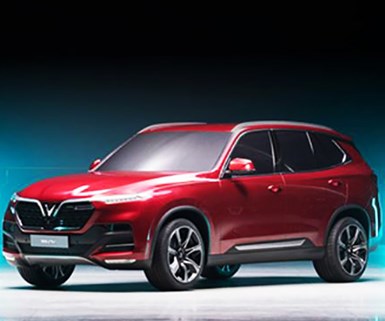 Adding to the degree of difficulty, the U.S. model will be an all-new electric vehicle, not its current Fadil crossover or other upcoming models, all of which are built on previous-generation BMW platforms and powered by Bimmer-sourced engines. Production of the EV is due to ramp-up late next year at VinFast’s factory in Haiphong.

“Our ultimate goal is to create an international brand,” founder Pham Nhat Vuong tells Bloomberg News. “It will be a very difficult road and we will have to put in a lot of effort.”

No kidding. The odds are considerably stacked against the fledgling carmaker. Just ask Chinese competitors such as Guangzhou Automobile and BYD. Or Indian domestic titans Tata Motors and Mahindra & Mahindra. All have dropped or postponed plans to enter the U.S. Even some historic European nameplates such as Citroen, Opel, Peugeot and Renault, all of which once offered American models, have struggled to re-enter the market.

Those companies failed for various reasons, such as quality issues, regulatory hurdles, poor planning, unfavorable market conditions and a lack of brand awareness in the U.S.

VinFast’s Man with a Plan—and Bankroll

What he lacks in automotive experience, VinFast’s Vuong makes up for in cash. He is said to be Vietnam’s richest person, with a reported net worth of $9.1 billion. The 51-year-old tycoon owns 49% of VinFast and controls parent Vingroup, which owns the rest of VinFast. Vuong says he is willing to sink as much as $2 billion (yes, that’s with a “B”!) of his own money into VinFast, according to Bloomberg. Additional funds are expected to come from loans, an IPO, selling shares of Vingroup—a conglomerate with real estate and other holdings—and cutting spending at other group companies.

To boost sales in Vietnam, where VinFast faces competition from international heavyweights such as Ford, Hyundai and Toyota, VinFast is selling vehicles at a loss. The Fadil goes for about $17,000. In addition to the EV, production versions of the high-end sedan (LUX A2.0) and SUV/crossover (UX SA2.0) 2018 concepts are in the works. The company hopes to hike its annual output to 500,000 vehicles by 2023 by 2025. Until then, the company could lose nearly $800 million per year.

To help get up to speed, VinFast hired Jim DeLuca, former head of global manufacturing for General Motors, to lead the company, and industry veteran David Lyon as design director. The startup also has received technical support from key suppliers such as AVL, Bosch, Magna, Pininfarina and Siemens. The latter provides digital tools to aid vehicle design, engineering and production.

Such partnerships—plus a lot of hard work, cash and good fortune—will be necessary if VinFast has any chance of succeeding on a global stage.