If a safety occurs in that football game everyone is talking about, then someone is going to be very happy
#americas #Volvo

Volvo has long been synonymous with safety (although it significantly upped its styling quotient of late so that it has garnered plenty of deserved attention for that, too). 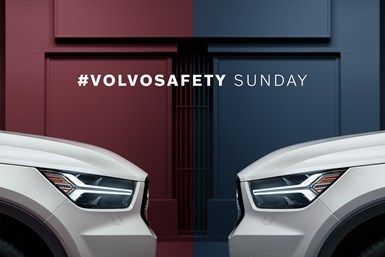 One would imagine that were both of those cars moving, the City Safety collision sensing systems in each would kick in and the cars would be stopped. (Images: Volvo)

In addition to the three-point safety belt it invented in 1959—and then opened the patent so all OEMs could make the safety tech available to their customers—the company lists among its safety accomplishments:

To gain attention for the more than one-million lives it estimates its safety tech has saved over the years, the vehicle manufacturer may give someone $1-million on Volvo Safety Sunday, which just happens to be February 2, the date of the Game That Shall Not Be Named.

Should a team score a safety in said game, there will be a random drawing of those who registered at the Volvo Safety Sunday site and. . . .

For those of you who may be interested in safety and a million bucks but not know what a safety in football is, according to the 2019 NFL Rulebook:

if the offense commits a foul in its own end zone or;

when an impetus by a team sends the ball behind its own goal line, and the ball is dead in the end zone in its possession or the ball is out of bounds behind the goal line.”

There are exceptions, but that’s the fundamental.

And while that may not be particularly helpful for those among us who don’t follow the sport, as you may not be surprised to learn, it doesn’t happen very often.