It’s also dangerous. As much as 25% of traffic fatalities in the U.S. are caused by speeding. 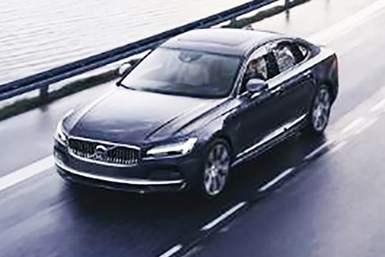 To try to prevent such accidents, Volvo is capping the top speed of its new vehicles at 180 kph (112 mph), no matter where in the world they’re sold.

Volvo’s lineup of cars and crossover vehicles previously maxed out at between 120 mph and 155 mph.

Volvo floated the plan last year. Since then, the company says it has received push back from some customers and critics who maintain it’s their right to go as fast as possible.

But Volvo opted to err on the side of safety, even if it means losing some customers as result of the policy.

“We believe that a carmaker has a responsibility help improve traffic safety,” asserts Malin Ekholm, who heads the company’s Safety Center. “Our speed limiting technology, and the dialogue that it initiated, fits that thinking.”

Let’s be honest, unless you take your car to the track, 112 mph still is crazy fast. It far exceeds the legal limit in most countries. Except for the unrestricted sections of the German autobahn, European countries typically restrict highway speeds to 120-130 kph (75-81 mph). In the U.S., such limits range from 55-85 mph.

Volvo acknowledges this. But the company argues that it’s at least a step in the right direction.

“We decided there really is no reason to go faster than 112 mph” Ekholm tells Autocar. “112 mph is still fast, so is that going to be the end of speeding? No, it’s not, but it’s still a limitation. Everyone talks about speed and speeding, and we wanted to do something to show that we’re serious.”

Volvo, which has long been a leader in car safety, points out that people tend to drive too fast for traffic conditions and their own abilities to control a vehicle at high speeds. Excessive speeds also diminish the effectiveness of in-vehicle safety systems (seatbelts, airbags and ADAS technologies).

In addition to the factory-installed regulator, Volvo is making its Red Key option standard on all new vehicles. The system, which is being renamed Care Key, allows car owners to set their own speed limits for themselves and other drivers.

Several other carmakers offer similar technologies, which parents frequently use to restrict the speed of teen drivers.

Volvo also is evaluating ways to combat drunk and distracted driving. This could include the use of driver monitoring systems.

It’s all part of the company’s goal of eliminating all traffic fatalities and serious injuries. That’s an extremely ambitious, and possibly unattainable, target. But it’s good one—and any step in that direction is worthwhile.