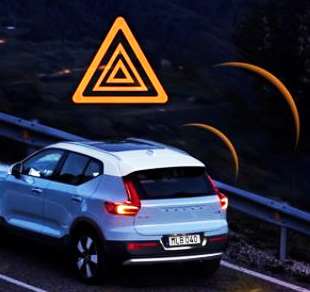 Volvo Car Corp. is standardizing its connected-car technology on all 2020-model vehicles in Europe.

The system, which debuted on select models in Sweden and Norway in 2016, allows vehicles to send a message to a cloud-based server when their hazard warning lights are turned on. Data from a vehicle’s traction control system also is shared.

Information is relayed to other nearby vehicles equipped with the technology to alert approaching motorists of possible traffic slowdowns, slippery roads and other safety risks. Volvo says the vehicle-to-vehicle system is especially useful on blind corners and over the crest of hilly roads.

In addition to new models, the technology can be retrofitted on 2016- and later-model Volvo vehicles built on the company’s Scalable Product Architecture or Compact Modular Architecture platforms. Volvo Trucks, which is owned by AB Volvo, began offering the technology last year in Europe.

Volvo Cars says it also will upload the data to a central digital library that other carmakers can access.