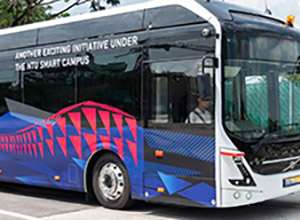 Truckmaker AB Volvo plans to begin testing an autonomous electric bus this spring on the campus of Nanyang Technological University (NTU) in Singapore.

Volvo claims the 39-ft prototype is the world's first autonomous bus of that size. The company developed the self-driving-control systems in conjunction with NTU, and has already tested the bus at the university’s proving grounds for autonomous vehicles.

The Volvo 7900 electric bus is equipped with lidar, surround cameras and other sensors. An advanced global position satellite system uses real-time kinematics with multiple data sources, which Volvo says can pinpoint location to with one centimeter.

The bus also has an “inertial management” system that measures lateral and angular movement. Volvo says this will improve navigation over uneven terrain to help provide a smoother ride.

The 85-passenger model requires 80% less energy than an equivalent-sized diesel bus. View a video of the bus HERE.