Even though the XC40 Recharge P8 AWD won’t be out for some months, seems global demand is strong
#Tesla #Geely #Volvo

One of the effects that Tesla has had on conventional OEMs is that when they have an electric vehicle that will be launched at some point in the future they, too, start taking orders and deposits, and they boast as to how well the orders are coming in. Volvo has announced that the XC40 Recharge P8 AWD, an all-electric vehicle that won’t go into production until later this year, is now available for order in select markets and the company has received “several thousands of firm orders even before the formal start of sales.” 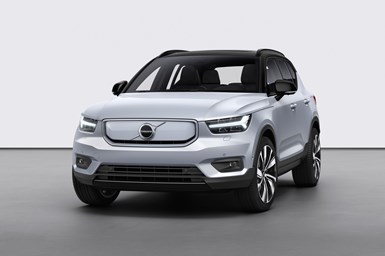 Meaning that even before today there were people clamoring for the car. The X40 is certainly a good SUV in its non-battery electric form. Odds are there weren’t thousands of preorders.

Volvo is transitioning its propulsion strategy so that by 2025—which is getting closer by the day—half of its global sales will be full-EVs and the other half hybrid.

Electrification right across the board.

According to Volvo, the XC40 Recharge P8 offers a range of over 400 km, or about 250 miles, (on the European Union World Harmonized Light Vehicle Test Procedure (WLTP)) on a single charge. The propulsion system output is 408 hp. The battery, which is secured in a safety cage on the floor of the center of the vehicle, charges to 80% of its capacity in 40 minutes on a fast-charger system.

Volvo is owned by Zhejiang Geely Holding of China. China has a new energy vehicle (NEV) policy that is strongly promoting both EVs and hybrids. China was Volvo’s second biggest market in 2019, behind Europe as a whole (154,961 to 340,605). And in Europe, the need for OEMs to sell hybrids and EVs is now a very real thing given the requirement for 95% passenger cars to hit 95 g/km of CO2, not a trivial matter.