VW poised to acquire the last 0.4% of is luxury brand
#Volkswagen #HP #Daimler

Perhaps you thought Audi was a fully owned branch of the Volkswagen Group all along. Nope, but it soon will be.

For now, there are still about 153,000 Audi shares owned by outside stockholders.

The final sale is expected to be finalized at Audi’s still-unscheduled annual meeting later this summer. The transaction will complete an acquisition that began 55 years ago.

Audi’s founder was August Horch, who formed his first company in 1899 and named it after himself. He had learned his craft as head of production at Carl Benz. Horch cars became renowned as high-end luxury cruisers, propelled by inline-8 and V-8 engines that cranked out between 62 hp and 120 hp.

When he decided to launch a second car company in 1920, Horch needed a new name for it. So he translated his own name, which means “hark!” in German, into Latin. Thus Audi was born, with a focus on Germany’s midsize luxury market.

In 1932 Horch and Audi were combined with two others, DKW and Wanderer, to form a new Chemnitz-based company called Auto Union. Its new logo: four interlocking rings to signify the four divisions.

But by 1942, Horsch had ceased production. And by 1945, Auto Union’s plant was dismantled and its assets expropriated by the Soviet occupation forces after World War II.

Yet the Auto Union name, along with its four-ring logo, lived on…as a spare parts depot in Ingolstadt that morphed into an independent manufacturing company. In 1958, that company became a subsidiary of Daimler-Benz. And by 1965, the Audi nameplate resurfaced on a popular Auto Union sedan.

In 1965, Auto Union also became part of Volkswagen, which had been formed in 1937. The new owner wanted its acquisition to concentrate on making VW Beetles, not Audi sedans. But Auto Union chief Ludwig Kraus had other ideas. He secretly pressed on with an entirely new model, debuting it in 1968 as the Audi 100. The car was a hit and secured the brand’s existence. 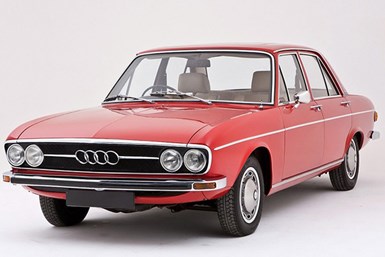 By 1974, a young and equally stubborn technical chief named Ferdinand Piech had succeeded Kraus. He began transforming Audi into the technology-driven brand it is today.

Piech, who died last year at age 82, went on to become VW Group’s chairman and CEO, leading the giant carmaker to become a tech-centric, 12-brand powerhouse that ranks among the world’s top three vehicle producers.